feel free to post your questions or conversations in english.

Wanted to say Hello and introduce my self and my "young-timer" Audi 100 Type 44 from 1984. The Audi has a 1,9 gasoline engine with Keihin KS2 carburetor.

To start from the beginning Im the 3th owner of this vehicle. The car was both new in the Bayer region in German on the 02.06.1984 and I have the original papers and documents to prove it. In 1994 it was sold and taken to Estonia. I have no idea of the original mileage of this car, could be around 500000 km now. Because the original odometer went "toast" a long time ago(in 1997 to be exact).

Most of the car is still original,no fancy stuff like electric windows etc. Never has been painted,rebuild or welded by any of the previous owners.

This was the original interior but it was in such a poor shape I had to renew it. All the seats where more or less trashed.

Its still in use as a daily driver but that will change in the near future because, time has taken a beating on the vehicle itself. There are some serious bad spots and parts that need to be replaced/repaired(aka broken and thorn carpet). Despite the "trashed" looks I think ,with some hard work it can be made look nice and more or less a show car,then a beat up clunker.


Steve(MzMa)
PS! My German is way too rusty at the moment to wright in it. So please forgive me.
Nach oben

and welcome here. A Typ 44 as daily driver works very well (proven by me). You have to change or repair little parts every few weeks, but hey, at least you got the coolest car around!

Your changed interior now looks way better than the original one.

Someone stole my car. 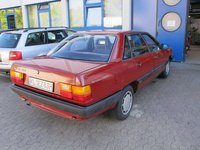 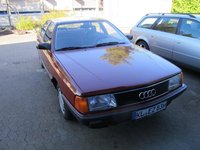 But now it has to be repainted and welded

Thank you all for the warm welcome.

I think 2016 will be the last year that I will use it in the traffic. I need to do some serious body work with it, because it dose have corrosion damage. Thank god,its not structural rust,more like things that come with 31 years of age on a vehicle. And I try to preserve and do as much as I can not to let it become a rust bucket.
The most common misconception,that people seem to have is that all Typ 44(in some regions referred as C3) bodys have Zinc coating. At least as much as my own research as been Zinc coating did not come until 1987! Correct me if im wrong with this one.

Some things do break and mostly because of old age. The engine runs,despite high mileage really fine. No oil leaks, 1-2l oil per year have to be added to the engine(factory nor is 1l per year) so that says the engine is doing well. Dosent smoke or stall,starts even in -25 cold. Engine has seen as far as I know no repairs. Oil changes have been done every 5000km. This year I changed the valve cover gasket,because it was starting to leak. I was expecting all kind of oil deposit and goop under it. But this is what it looked like:

I would say really normal compared to some modern cars that have never have seen any oil changes, turning there use. The previous owner used only Addinol mineral oil. Im using same brand but semi-synthetic oil in the engine.

Anyone who is wondering if someone dose drive a old car like that in a daily traffic, here is the proof Im not the only one:

In the region of Estonia where I live there are some still in use from 1,9 gasoline to some that have diesel engines in them.

There is a lot more to tell but I even dont know from where to begin.

I was thinking of from where to being but I kind of figured I would talk about some general stuff and future plans.
What I like about the car type 44 in general:
- large body and most of the time is stable with side wind.
- since the body is 20cm from the ground, its good to be used on none hard cover or dirt roads.
- My remark is E98 fuel is the best for Type 44 engine, runs smoother,less fuel consumption, warms up quick turning the cold winter.

Now some of the future plans:
- First and for most: body works. Repairing the front fenders lower sides and rear fenders lower sides. Seem to be a typical place where they tend to rust. If my car had
mud guards in the rear and front(like Audi Quattro has) the body would have been a little better preserved.
Another way to overcome the problem is buy another car(maybe swap some parts)! Well sounds easy but all that come up for sale in Estonia are newer models(1987 -1990) or they are even worst rust buckets then my car is.

With Fenders there is one thing that people have told me. Try too keep as much of the original fenders or find a original well preserved fender instead of cheap after market products.
Im going to buy a welding machine anyways so I might as well experiment with it on the Audi.

Paint job: the original paint is still intact but its bleached and polishing it helps only for a short time. I dont see the paint job that much as a problem because I can do that myself.

Replacing parts:
The only real problem right new is the carpet. My car has a two part carpet, some cars have one huge piece of carpet inside them. The original carpet got trashed because the heather started to leak and I had no idea how to get the wet insulation out from the car. So I had to cut the carpet so I could clean it and get the moisture out from the car and do preventive anti-corrosion measures to prevent further damage.

The original carpet could be duck-taped back together but that sounds kind of lame to me. I hope maybe there will come a car into a junkyard from where I can get a better carpet.
Also I need to replace the original signal,that dosent work at all.
The goal would be to keep the car as it was when it rolled out not maybe 100% original(that is impossible anyways). But at least era correct. The only thing I would change would be instead of painted moldings on the pumpers, replace thous with chromed ones.

About factory accessory's:
The car has factory rear window heading and it works fine, helps me a lot turning the cold winter

It also had a factory outside thermometer? Im not sure what happened to it but its no longer there only wires have remained.

Question:
Dose anyone have pictures of the original 1983-1984 radio for the Audi Type 44?
Nach oben

Question do all type 44 Audis have this VIN code sticker attached to the car?
Was this a new feature on Audi 100 type 44? Have not seem many of these stickers on other type 44 cars. 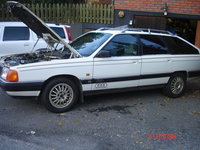 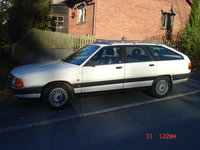